What the Flip is Cornhole? 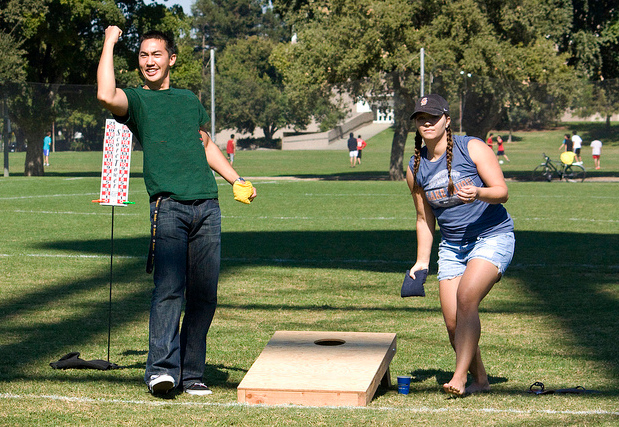 Cornhole - it’s not what you think it is.

It may also be known as “corn toss”, “bean bag toss”, “baggo”, or “bags”, but true players passionately call it by its real name - cornhole. It’s a lawn game similar to horseshoes but way better. Instead of using metal stakes and horseshoes, the game is played with plywood boards and corn-filled bags. Players toss the bags from opposite ends of the boards and attempt to make the bags into the six inch holes cut into the plywood boards. Players commonly play to 21 where a bag on the board is worth 1 point and a bag in the hole is worth 3 points. A bag in the hole is called a cornhole - get it? Hilarious, we know. There are a few more rules, but that's essentially the point of the game.

Why is such a simple game so much fun?
First of all, the name - who wouldn't love a game called Cornhole? Well, your grandfather may not understand but we know it's awesome. It's also a social game played with friends and family in backyards, tailgates, BBQ’s, parties, and any other kind of social function. The game is portable so you can play it just about anywhere, and the bags are light so it's safe for the whole family to play, even those young whippersnappers. The great thing about bringing out the cornhole boards is that it’s an easy way to “break the ice” at any party or social gathering. It gets uncle Bob up and moving and having fun, and before you know it he's telling you stroies about "Nam" and the invention of the lava lamp.

Many cornhole enthusiasts carefully and meticulously build their boards from scratch. Now, what’s more awesome than man building something with his own two hands? The answer is nothing. Boards can also be purchased and designed with custom logos or graphics.

The cornhole community has also created a whole set of terms to communicate the happenings of the game, like woody and dirty bag. The trash talking possibilities are endless when playing cornhole. Sure, the game starts out as a charming, sophisticated game, that is, until you either score or lose. That’s when the excitement begins!

After you play your first game of cornhole, you’ll be surprised by how much fun you can have with plywood. Get your cornhole on!