The Secret History of Cornhole Revealed 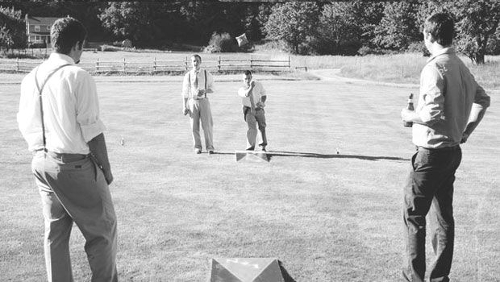 No one can dispute that cornhole is just awesome – a game quickly gaining popularity in the United States. With its increased popularity more and more people are wondering about the origins of the simple game that’s absurdly fun. There are many popular versions of the secret history of cornhole. Who invented the game? Where did it come from? Once and for all we will settle the dispute here and tell you exactly where the game started.

Cincinnati, Ohio likes to lay claim to the original area where bags were filled with kernels and tossed into plywood holes. It is hard to argue with this claim if you understand how insanely popular cornhole is in Cincinnati. If you go to any backyard party in an Ohio home today there’s a very good chance that you'll find lots of food, beer and cornhole.

The good people of Kentucky may contend any notion that their beloved game of cornhole was invented anywhere but in their home state. It is believed that an early pioneer by the name Jebediah McGillicuddy played a version of the game in the foothills of Kentucky where it continues to be very popular today. The Kentucky connection is in keeping with the idea that cornhole started in the Midwest.

Other stories say that the game was invented by the resourceful Native Americans in Illinois using dried animal bladders stuffed with corn and tossing them competitively. Hey, didn’t they invent soccer too?

Many farmers across the United States have a proud German heritage and many claim that cornhole dates back to their motherland.  The story goes that a humble German cabinet maker by the name Matthias Kuepermann noticed young boys tossing rocks into holes in the ground. Concerned for their safety he provided them with burlap bags filled with corn and wooden boxes. Those German farmers brought over games like cornhole or variations of cornhole especially to the farming region surrounding Cincinnati.

So at the beginning of this article we told you we would settle, once and for all, the origins of the game of cornhole. That would actually be too easy. The truth is that the history of cornhole still remains a mystery. We’ll let you be the judge.

Who knows the real history of cornhole? If you have your own version please share it with us below. We would all love to hear your story.