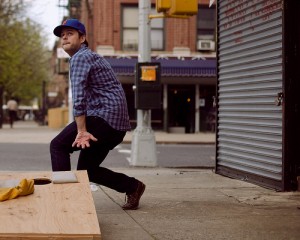 Every awesome game has words that describe the happenings of the game. Terms like touchdown and homerun come to mind. The prolific cornhole community has begun to create their very own language that describes the culture of our game. Here are a few words most commonly used by AnticsNation:

Woody
It’s not that dude from Toy Story.
It’s a bag that lands squarely on the board and gives you fuzzy feelings inside. Worth 1 point.

Dirty Bag
It’s not that punk dating your daughter.
It’s a bag gettin’ dirty by landing on the ground.

Honors
It’s not what parents brag about with bumper stickers.
It’s the team who tosses first, resulting from the team scoring last.

Cornfusion
It’s not a new blend of corn-based foods.
It’s when nobody seems to agree on the scoring during an inning.

Blocker
It’s not Dikembe Mutombo spiking the ball, in yo’ face.
It’s a bag that lands on the board and blocks the hole.

Back Door
It’s not whatever act your dirty mind just thought about.
It’s a cornhole bag that flies over a blocker and enters the hole.

Cornhole
It’s not that dark, scary place where undigested corn comes out of.
It’s a bag that lands in the hole, worth 3 points. Booyah!

Slider
It’s not that delicious finger food, especially at 3am after 15 to 20 beers.
It’s a bag that slides into the hole.

Four-Bagger
It’s not that date you hooked up with on Tinder that didn’t look like their profile picture.
It’s when player puts all four bags in the hole.

Stiff Woody
It’s not that thing young men wake up with in the morning.
It’s chocking under pressure resulting in a terrible shot.